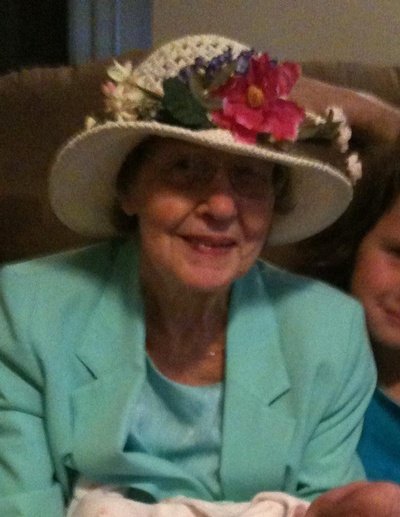 Please share a memory of Sarah to include in a keepsake book for family and friends.
View Tribute Book
Sarah M. Kostrna was born July 27, 1926 in Binghamton New York. She passed away May 18th 2018 in Grants Pass Oregon. Sarah was raised on a dairy farm in Penn. with her six siblings. After graduating high school she attended nursing school in Montrose Pennsylvania where she received her Registered nursing degree. One of her first jobs was at a hospital in New York City where she met her husband Stephen F. Kostrna. After a few years and three children they moved to Cortland New York where her youngest child was born. Sarah worked for the local hospital and a few nursing homes. In 1980 she and Stephen moved to Houston Texas, after his death Sarah worked as a nanny. In 1988 Sarah moved to California to be near her children and be a nanny for her youngest daughter's children. Sarah loved children and babies were her specialty. Sarah volunteered at St. Joseph's Medical Center for many years Sarah attended Holy Cross United Methodist Church where she was involved with Sunday School, Joy Circle, and Sew and Sow. She was always known for wearing hats and planting flowers around the church. In 2011 Sarah moved to Grants Pass Oregon to live with her son.She is survived by her children Patricia (Scott) Woodbury, Charles (Kim) Kostrna, Michael (Jennifer)Kostrna, and Merry(Ken) Mitchell-Sloan, eight grand children, Stephanie Keeney, Maranda Ramirez, Stephen Mitchell, Ilsa Tinnin, Andrew, Stephen, Racheal, Sarah Kostrna and ten Great grand children and five of her siblings, Grace, Susan, Frannie, Mary, Frank.
To send flowers to the family or plant a tree in memory of Sarah Kostrna, please visit Tribute Store
Online Memory & Photo Sharing Event
Online Event
About this Event

Look inside to read what others have shared
Family and friends are coming together online to create a special keepsake. Every memory left on the online obituary will be automatically included in this book.
View Tribute Book
Services for Sarah Kostrna
There are no events scheduled. You can still show your support by sending flowers directly to the family, or planting a memorial tree in memory of Sarah Kostrna.
Visit the Tribute Store

Share Your Memory of
Sarah
Upload Your Memory View All Memories
Be the first to upload a memory!
Share A Memory
Send Flowers