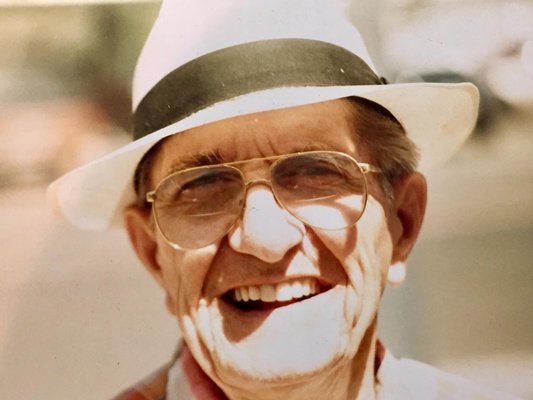 Please share a memory of Samuel to include in a keepsake book for family and friends.
View Tribute Book
Samuel Floyd Fonzi was born on February 25, 1922, to Italian immigrants, Guiseppe and Guiseppina Di Carlo Fonzi, at Dameron Hospital, in Stockton. Four years later, the couple had a second, son, Rico. Tragedy struck the family in 1931, when the boys’ mother died. Sam was sent to live with his uncle, George Di Carlo, in Linden. George had also immigrated to the United States, along with his two sisters, Guiseppina and Lena, and his brother, Gulio. Sam’s younger brother, Rico, lived in Pittsburg, with his father. The two boys spent time together during summers and holidays, and put down roots in their respective new hometowns. Sam graduated from Linden High School, in 1940. George Di Carlo married Mary “Sis” Harrison, and had two children, Joe and Patsy. Sam had the good fortune of being raised with two additional children he considered his siblings, in addition to his brother in Pittsburg. When the world changed on December 7, 1941, Sam was among those who immediately answered his country’s call. At the age of nineteen, Sam enlisted in the United States Navy. He was a gunnery specialist on submarine patrol aircraft, based in Pearl Harbor. Sam recalled two distinct family memories about his return to the mainland. He was sent home for a short time during the war and remembers a very young baby Patsy, being held in her parents’ arms. The little girl was a toddler by the time Sam came home for good. Back home in Linden, Sam went to work in his uncle’s store, later established as Di Carlo and Company. George, Sammy, and Joe, (even sometimes Sis and Patsy) were staples in the then thriving Linden business community. When someone needed a fishing license, PE clothes for school, or new work boots, Linden residents could count on El Rancho Sports Shop, or Di Carlo and Company to be there. In 1953, Sam married Jacquie Short Fonzi. The couple raised four children, Joe, Jim, Jeanne, and John, who all attended Linden schools and graduated from Linden High School. Sam was a charter member of the Linden Lions Club, its last surviving member. He is a former president, and served as the club’s secretary as the world transitioned from stone tablets to high-speed computers. Computers were not something Sam ever saw a reason to master. On Sunday, June 3, 2018, Sam passed, after a short illness. He is survived by his four children, his former wife, Patsy Di Carlo Freeman, and his nine grandchildren. Sam made Linden, and its causes the central purpose of his life, and was ever grateful for the community that made him feel so welcome, and allowed him to thrive throughout his very full life. A celebration of life will be held on Saturday, 6/9/18 at Holy Cross Catholic Church in Linden, CA at noon. The family has kindly requested in lieu of flowers any donation to one of Sam’s favorite charities is greatly appreciated, Linden High Athletic Boosters Club, Linden Lions Club or the Catholic Chruch.
To send flowers to the family or plant a tree in memory of Samuel Fonzi, please visit Tribute Store
Saturday
9
June

Look inside to read what others have shared
Family and friends are coming together online to create a special keepsake. Every memory left on the online obituary will be automatically included in this book.
View Tribute Book

Share Your Memory of
Samuel
Upload Your Memory View All Memories
Be the first to upload a memory!
Share A Memory
Send Flowers