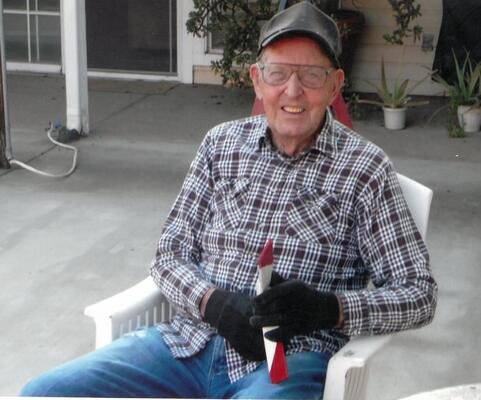 Please share a memory of Merlyn to include in a keepsake book for family and friends.
View Tribute Book
Merlyn Rokos went home to be with the Lord and his family on Wednesday, July 29, 2020 at the age of 98. Merlyn was born in Elmwood township, Leelanau County, MI on July 8, 1922. Merlyn was the fourth child of John and Martha (Kauer) Rokos, who were farmers. Michigan winters are very hard. During the depression, Merlyn, his father and brothers, hauled firewood by horse drawn sleigh 7 miles to Traverse City to sell in town every winter day. Merlyn married Mary McCartney on December 1, 1946. They settled in Traverse City, Michigan and lived in a home Merlyn built himself. They had three children; Susan, Michael, and Matthew. Merlyn was a police officer in Traverse City for 16 years, but pay was low. Merlyn needed multiple jobs to support his family. He worked at the Dyoung dairy farm, drove a school bus, and picked cherries. In 1962 the family moved to Milpitas, CA where Merlyn worked at Lockheed Martin on top of secret missiles and satellites for 25 years. After retirement, Merlyn moved to Lockeford, CA where he spent the last 30 years of his life. Merlyn was a self trained carpenter. He loved to make wooden toys and clocks that he gave away to school children and anyone who wanted one. He loved the outdoors and was an avid deer hunter until he was 86. Merlyn was 6'4" and 240 pounds, but was a kind and gentle man. He never had an enemy. He personified the golden rule. He treated everyone as he wanted tone treated. He often helped family and friends by repairing items too difficult for the average guy. He helped people move into a new house. He also helped people financially when they were in a dire situation. He was always there for us all: Our Family Rock. Merlyn was preceded in death by his wife Mary of 47 years; his daughter, Susan Cullom; son, Michael; and granddaughter, Jennifer Gucho. He is survived by his son, Matthew Rokos of Lockeford, seven grandchildren and all eleven great grandchildren. A memorial service (a life celebration) will be held when arrangements can be made at a later date.
To send flowers to the family or plant a tree in memory of Merlyn Rokos, please visit Tribute Store
Online Memory & Photo Sharing Event
Online Event
About this Event

Look inside to read what others have shared
Family and friends are coming together online to create a special keepsake. Every memory left on the online obituary will be automatically included in this book.
View Tribute Book
Services for Merlyn Rokos
There are no events scheduled. You can still show your support by sending flowers directly to the family, or planting a memorial tree in memory of Merlyn Rokos.
Visit the Tribute Store

Share Your Memory of
Merlyn
Upload Your Memory View All Memories
Be the first to upload a memory!
Share A Memory
Send Flowers